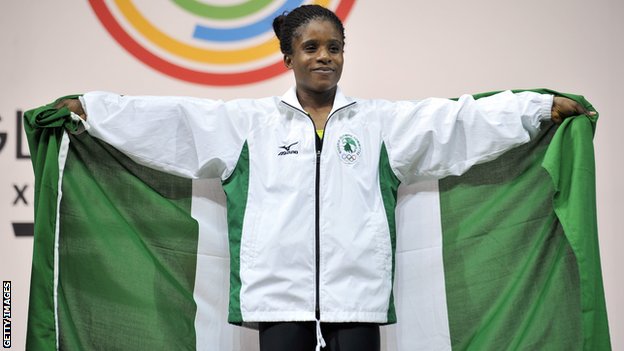 Nigerian gold medallist Chika Amalaha has been provisionally suspended from the Commonwealth Games for failing a drugs test.

The 16-year-old won weightlifting gold with a combined total of 196kg in the women's 53kg category. Her 'A' sample was found to contain amiloride and hydrochlorothiazide, which are both prohibited as diuretics and masking agents.  Amalaha will have a 'B' sample tested on Wednesday.

The teenager won gold last Friday, as Dika Toua took silver to secure Papua New Guinea's first medal of Glasgow 2014, with India's Santoshi Matsa winning bronze. Amalaha is the first athlete to fail a test at the Games, but Welsh 400m hurdler Rhys Williams and 800m runner Gareth Warburton both missed the competition after being charged with anti-doping rule violations.

Philip said: "Fourth is always the first loser, but there's a lot more to come.  I wanted a medal, but it's my first ever Commonwealth Games. I'm really happy with that."

Okagbare, who still has 200m and long jump gold to aim at in these Games, said: "A season's best, a win - I'm just happy I was able to pull it off. After 70m it just felt easy." 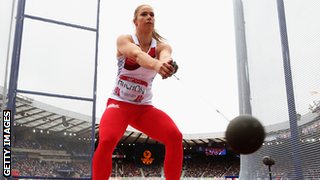 Sophie Hitchon on the way to bronze in the women's hammer

"The first few rounds were a little jerky and I only got it together later on but I am amazingly pleased with a medal," she said.

Canada's Sultana Frizell took the gold in a Games record 71.97m, while England's Sarah Holt was fourth with a season's best 65.67m.

The visually impaired 22-year-old and guide Mikail Huggins - who together won silver at London 2012 - crossed the line in 12.20 to emphatically claim the title by more than a second to the delight of a raucous full house.

"It is a bit daunting when everyone wants you to win, but I didn't feel the pressure too much," said Clegg. "The crowd and atmosphere have been brilliant and to win gold is amazing."

Laura Muir, one of Scotland's leading hopes, also had the crowd at the national stadium off their seats as she cruised into the final of the 1500m. 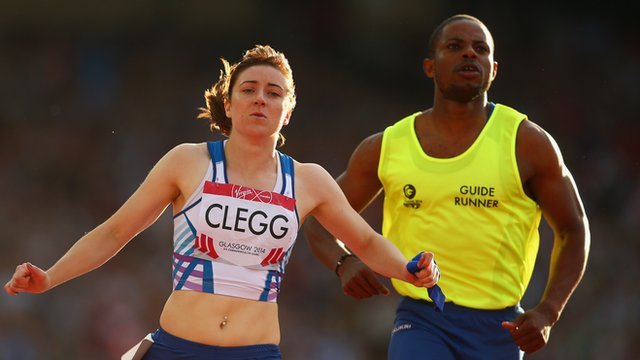 The 21-year-old will be joined in Tuesday's final by English trio Hannah England, Laura Weightman and Jemma Simpson.  Jamaica's O'Dayne Richards took gold in the men's shot put with a huge throw of 21.61m - a Games record.

Kirani James, the Olympic 400m champion from Grenada and one of the biggest names in Glasgow, looked in imperious form in qualifying for the final. England's Michael Bingham, Martyn Rooney and Nigel Levine also made it through.

Scotland's Laura Muir, far left, on her way to thrilling the crowd as she powered into the 1500m final

Wales' Aled Davies, England's Dan Greaves and Richard Okigbazi of Nigeria on the podium after the F42/44 discus final