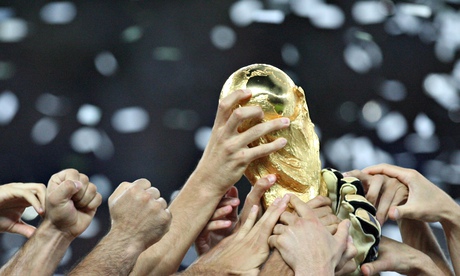 Days after the National Crime Agency (NCA) investigated allegations that a friendly between Nigeria and Scotland had been targeted by criminal syndicates, a Nigerian agent has been caught boasting on camera that he could arrange for players to be shown red and yellow cards at this summer’s World Cup in Brazil.

The Fifa World Cup tournament which starts on 12 June could be undermined by match-fixers. Photograph: Bernd Weissbrod/EPA

In an undercover sting by the Sun on Sunday newspaper, Henry Chukwuma Okoroji was filmed telling investigative reporter Mazher Mahmood that members of Stephen Keshi’s Super Eagles squad are willing to take bribes of €50,000 (£41,000) to deliberately pick up a yellow card and €100,000 for a red. The former player –who now lives in Italy – also claimed he has already recruited two players and has the ability to influence team selection through a senior figure close to the Nigerian Football Federation (NFF).

Filmed in a Milan hotel room at the start of April, the video shows Okoroji and his associate attempt to enhance their credibility by inviting Lazio and Nigeria player Ogenyi Onazi to the meeting – however there is no suggestion he was involved in any fixing plot.

“Hundred per cent, two players. It’s left up to you people what you want to do. You people will pay for a yellow or a red card or a penalty,” the agent said.

“Most of them will do it because they don’t pay them good in Nigeria.” Asked if there was a risk that any illegal approaches could be reported to Fifa, he added: “Never. Nigeria … never, never, never! 100% because I have someone already do this type of thing.”

Okoroji also claimed to have enlisted five Italian players to fix matches in the past and claimed he would be travelling to Nigeria to confirm the fixes are going ahead. He said: “I knew those ones would agree because they’ve never seen money before and they don’t know about these things. I can tell them: ‘Just go and kick someone, I will give you some money’ because they don’t know about fixing.”

In April 13 professional players were arrested in connection with alleged spot-fixing and another six rearrested over the claims. Last week, the NCA went public over their investigation into the match between Scotland and Nigeria at Craven Cottage, which finished 2-2. Nigeria coach Keshi –who will lead his side against Argentina, Bosnia-Herzegovina and Japan at the World Cup – strongly rejected the allegations in his post-match press conference.

The NCA did not confirm that they are investigating the latest claims, although the Sun on Sunday’s report suggested that they and the Italian FA are interested in seeing their evidence. “The NCA will from time to time provide operational detail necessary for public reassurance purposes,” said a spokesman on Sunday night.

“It does not routinely confirm or deny the existence of specific operations or provide ongoing commentary on operational activity.”