By AfricanOutlook Reporter with Files

Lupita Nyong'o has won the Academy Award for supporting actress in her role as Patsey, a favored but abused slave in the Steve McQueen-directed drama "12 Years a Slave," as two Ugandan actors told of their experience on the set of an underground local film that also featured new Hollywood starlet Lupita Nyong’o, eight years ago.

The win follows Nyong'o taking the same award at the Screen Actors Guild awards, a good barometer of Oscar winners. This is the first Academy Award for the Mexico City-born, Kenyan-raised actress. She has also won the Broadcast Film Critics Assn. Award for the role, as well as a number of regional accolades from critics/groups in Austin, Chicago, Los Angeles, London, Phoenix and more. Nyong'o was three weeks shy of graduating from Yale Drama School when she was cast by McQueen.

Lupita, 30, this year’s breakthrough star and daughter of Kenyan politician Prof Peter Anyang Nyong’o, was by press time still waiting with bated breath for a possible win at last night’s Oscars, where she was most favoured for the Best Supporting Actress statuette. This, thanks to her sparkling role as Patsey, in 12 Years a Slave.

Lupita Nyong'o won the Oscar for best supporting actress on Sunday for her role as the hardworking slave Patsey in drama "12 Years a Slave," capping a breakout awards season for the Yale-trained Kenyan actress. 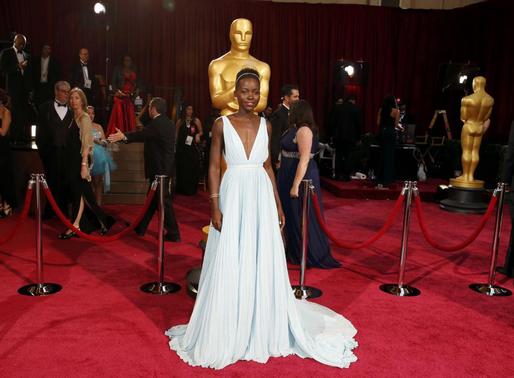 Nyong'o, 31, won the Oscar in her first feature film role, earning a thunderous standing ovation from the Hollywood audience. She beat fellow frontrunner Jennifer Lawrence's portrayal of a loopy housewife in caper "American Hustle" in one of the most closely-watched Academy Award races this year.

"Yes!" the actress exclaimed when accepting the award after hugging her brother, "12 Years a Slave" director Steve McQueen and other actors in the film.  "It doesn't escape me for one moment that so much joy in my life is thanks to so much pain in someone else's, and so I want to salute the spirit of Patsey, for her guidance."

Nyong'o, who earned the same award from her peers at the Screen Actors Guild Awards in January, was chosen for the role from some 1,000 young actresses who auditioned.  She received plaudits from critics for her depiction of suffering as a field-working slave and the object of sexual desire from her master.

The award marks Nyong'o's coronation into the top echelon of dramatic actresses working in Hollywood. She has also burnished her image as a new emblem of high fashion with her styles on the red carpet.  "12 Years a Slave," by British director McQueen, is based on the memoir of Solomon Northup, a 19th century free black man tricked and sold into slavery.  Nyong'o's Patsey, who is able to pick more pounds (kilos) of cotton per day than the stronger male slaves, embodies resilience in the drama even as the primary recipient of physical and sexual violence.

"There was an underlying stream of grief at all times even in the lighter scenes," Nyong'o said last year while promoting the film. "There is a deep pain in Patsey throughout and living in that pain was not easy."

Lupita Nyong'o hit the Oscar red carpet wearing a custom Prada light blue silk georgette gown with a deep V-neck top and low cut sides.  She completed her look with satin platform sandals and a matching clutch.  Her headband got Twitter abuzz. The gold and diamond headband, earrings and bracelet were all from Fred Leighton. 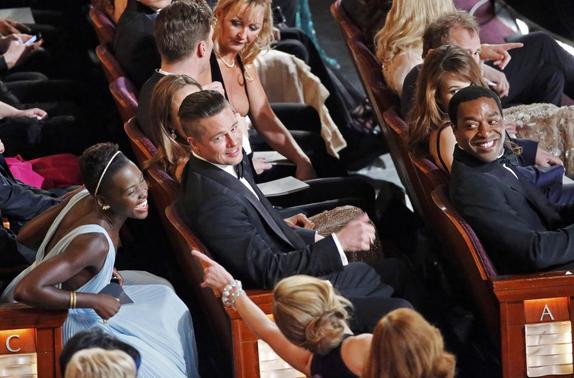 Back in time, Samuel Ibanda and John Wayne Muganza were part of the small cast for Roho, a 16-minute film shot in Kampala in 2006. A project of the annual Maisha Film Lab, the short movie was written and directed by a Kenyan filmmaker but featured a predominant Ugandan cast and crew.

Ibanda plays Judah, a down-on-his-luck slum dog whose radiant girlfriend Leila (Nyong’o) is the daughter of a merciless mobster (Michael Wawuyo). Muganza, on the other hand, is the mean hit man who executes his boss’ orders. But like many other Maisha films, Roho never went mainstream. Its only form of publicity has been participation in little-known festivals across East Africa, including the recently-concluded Euro-African Film festival (EAFF) in Kampala.

Now, both Ibanda and Muganza have come out to share their pride at having had the opportunity to work with the Kenyan actress whose heartbreaking performance in 12 Years a Slave has since turned her into an overnight global icon and landed her an Oscar nod.

“She was passionate, focused and self-driven, and you could easily tell she was going for gold. I am so proud to see that she has achieved her dream,” Ibanda said, praising the beauty for helping him adapt to his role.

Hunky Ibanda’s performance stood out, perhaps given his initial experience in the entertainment industry, having been an extra in the Oscar-winning Last King of Scotland, and an acclaimed dancer with the famed Latin Flavour outfit.  But the fashion-forward actress stole the show in one particular love scene where she gets it on with Ibanda. Upon manoeuvring a shanty slum en route to Judah’s shack, Leila wastes no time to set the romance rolling. First, she throws off her niqab, then her blouse, then her knickers… 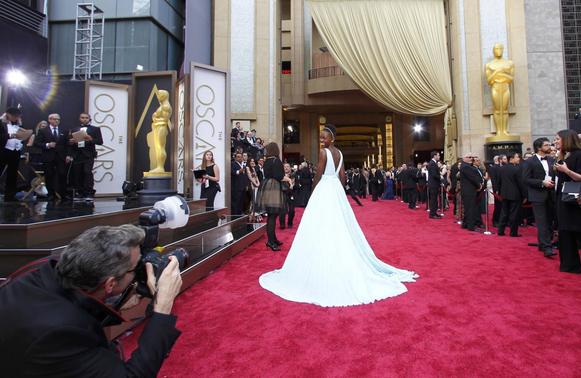 What follows is an unsimulated steamy romance which Ibanda says was his favourite part to shoot, and that he would possibly retake it over and over again, given the opportunity.

“I had never shot a love scene; so it was tense. But she helped me get through it by taking some sessions off the set to understand each other,” Ibanda explained, revealing he hasn’t talked to Nyong’o since then but hopes she still remembers the good times they had on the set.  Muganza too spoke highly of the Kenyan star who hails from an affluent family, praising her versatility and hunger to become a film star.

“She wasn’t scared of getting the job done even if it meant kissing and stripping for the scene. There is a lot to learn from her,” says the burly Malaysia-based actor who has had stints on NTV’s The Hostel.

Both actors say they are not surprised Nyong’o has gone on to scoop multiple coveted awards for her breakout role last year as Patsey, a tormented slave and object of sadistic sexual fantasies. If Nyong’o scooped the Oscar last night, she becomes the first ever black African actor to achieve the feat. And Roho director, Cajetan Boy, thinks it is possible. 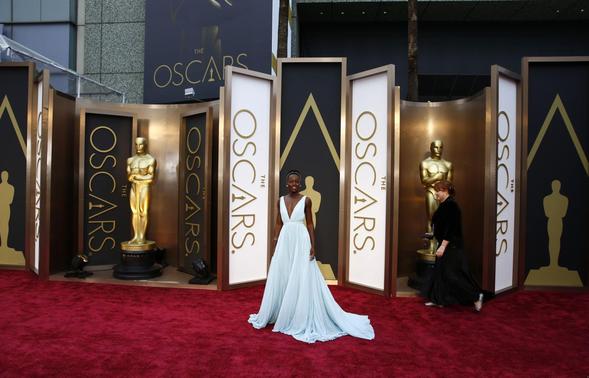 After sharing poignant pictures of a humble-looking Nyong’o on the set of Roho with us, Boy candidly spoke of his compatriot’s impeccable ability to transform into characters. He recalled incidencts where Nyong’o would get so sensual with Ibanda during shooting breaks that people around started thinking the pair had something going on. She even offered some directing tips.

“She told me that how a person touches another and [scent] are very important in making a love scene look real,” recalls Boy who cast Nyong’o as a last resort after the original actress pulled out at the last minute.

Back then, Boy says, the Shuga series star didn’t seem enthusiastic about acting – she was only working as a production assistant for Maisha. But then she showed rare ability to succeed at anything she did, he adds.  Although Boy is now a celebrated filmmaker back in Kenya, he doubts now-famous Nyong’o would ever turn up for him again since he can no longer afford her pay cheque. But at least he is proud of her success, just as the rest of Africa is.

Lupita Nyong'o, best supporting actress nominee for her role in "12 Years a Slave", wearing a Fred Leighton Headband and Prada gown, arrives at the 86th Academy Awards in Hollywood, California

"12 Years a Slave" centers on the story of Solomon Northup (Chiwetel Ejiofor), a free black man in the North who is abducted and sold into slavery in the South.  Nyong'o's Patsey, a standout slave for Michael Fassbender's plantation owner, is raped and beaten, all while trying to find a shred of dignity to cling to. The film was nominated for best picture, and director McQueen and costars Fassbender and Chiwetel Ejiofor are also Oscar nominees.

Before starring in McQueen's film, Nyong'o acted onstage in "The Winter's Tale," "Uncle Vanya" and "The Taming of the Shrew." Nyong'o recently hit the big screen alongside Liam Neeson in Jaume Collet-Serra's thriller "Non-Stop."

Nyong'o was one of the favorites to win the award, though many pundits singled out Jennifer Lawrence, who won the supporting actress Golden Globe for her role in "American Hustle." Nyong'o's fellow nominees also included Sally Hawkins in "Blue Jasmine," Julia Roberts in "August: Osage County" and June Squibb in "Nebraska."

The 86th Academy Awards are being held at the Dolby Theatre in Hollywood.