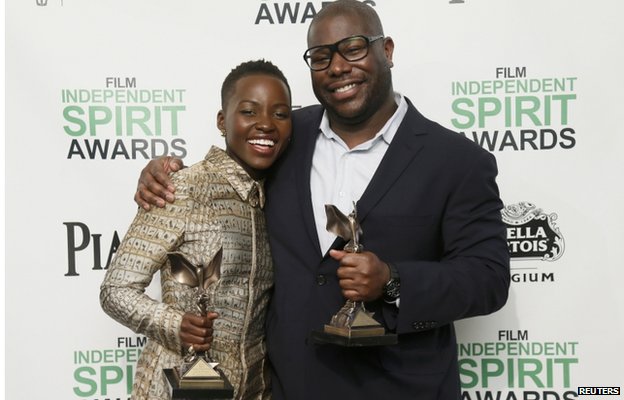 Rising star Lupita Nyong'o won an Independent Spirit award on Saturday for her debut movie role in 12 Years a Slave and told the audience: "Not a bad way to celebrate my birthday."

The Kenyan actress turned 31 a day before the Oscars where she is a front runner for best supporting actress.

Other acting trophies went to Cate Blanchett, for her role in Blue Jasmine, and to Matthew McConaughey and Jared Leto, for their roles as Aids patients in Dallas Buyers Club. All three are favourites to win at the Oscars on Sunday night.

The annual Independent Spirit Awards, which honour low budget film-making, take place in a giant tent on Santa Monica beach. This year the ceremony was accompanied by strong winds and bursts of heavy rain beating down on the tent. 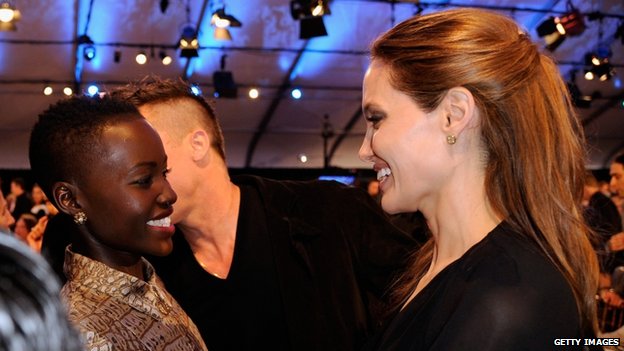 Screenwriter John Ridley told the BBC after his win he didn't realise how affecting the story was until he experienced it on the big screen with an audience.

"I had no idea until I saw it in a room with 250 people and felt what they felt at that moment," he said.

Picking up the best director award, McQueen dedicated it to the film's subject Solomon Northup who "inspired me to look and find the truth".

Brad Pitt, who co-produced and starred in the film, said backstage: "I thank Mr McQueen for bringing us all together to tell Solomon's story." He added: "It's interesting that it took a Brit to ask the questions why more films hadn't been made in America on our history."

Its writer Bob Nelson, 57, joked that it was the "fulfilment of boyhood dream to be oldest recipient of a first time screenplay award". He said Nebraska's veteran lead actor Bruce Dern "took a role based on my old dad and made him live again".

The documentary prize went to 20 Feet From Stardom, which shines a spotlight on the world of the backing singers.