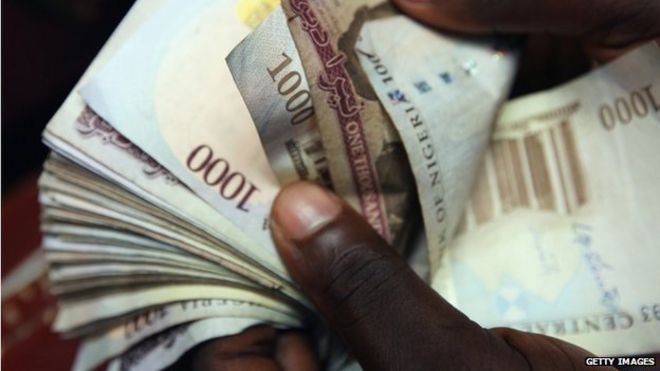 Nigeria's anti-corruption agency, the Economic and Financial Crimes Commission, EFCC, has arrested six senior central bank, CBN officials and 16 other top bankers to be arraigned in court tomorrow over an alleged complicity in a currency fraud running to N8 billion about $33m (£21m).

The Economic and Financial Crimes Commission (EFCC) which also held 16 private bank workers for the "mega scam" alleged that the suspects stole "tonnes of defaced naira notes", which were meant to be destroyed, it said on its website.

Wilson Uwujaren, Head of Media and Publicity of the EFCC who announced this in a statement on Sunday, said the suspects will be arraigned for circulating defaced and mutilated notes at the Federal High Court, Ibadan, Oyo State.

According to him, the suspects connived to recycle the defaced and mutilated currencies they were asked to destroy by substituting the notes with newspaper cuttings in naira note sizes.

Uwujaren said the suspects were arrested following a petition that the sum of N6.5bn was recycled by a syndicate involving top officials of the CBN in Ibadan, Oyo State.

The full statement by the EFCC reads: “The Economic and Financial Crime Commission has concluded arrangement to arraign in court, five top executives of the Central Bank of Nigeria implicated in a mega scam involving the theft and recirculation of defaced and mutilated currencies.

“The suspects, drawn from various business units of the apex bank, are to be docked by the anti-graft agency before a Federal High Court sitting in Ibadan, Oyo State, from Tuesday June 2, 2015 to Thursday June 4, 2015. The remaining 16 suspects are drawn from various commercial banks who were found to have conspired with the CBN executives to swing the heist.

“All the suspects, who are currently in the custody of the EFCC, are now ruing the day they literally allowed greed and craze for materialism to becloud their sense of judgment and responsibility, when they elected to help themselves to tonnes of defaced naira notes.

“Instead of carrying out the statutory instruction to destroy the currency, they substituted it with newspapers neatly cut to naira sizes and proceeded to recycle the defaced and mutilated currency.”

He added, “The fraud is partly to blame for the failure of government monetary policy over the years as currency mop up exercises by the apex bank failed to check the inflationary pressure on the economy.

“The lid on the scam, which is widely suspected to have gone on unchecked for years, was blown on November 3, 2014, via a petition to the EFCC, alleging that over N6,575,549,370.00 was cornered and discreetly recycled by light fingered top executives of the CBN at the Ibadan branch.”

The arrests were made last week, before the president's official swearing-in ceremony, and so should not be seen as part of Mr Buhari's promised clampdown on corruption, reports the BBC's Will Ross from Lagos.

The move is more likely to be a show of strength from the EFCC, in an attempt to prove its relevance, the BBC correspondent adds.

The EFCC suspects the scam of incinerating newspaper instead of old notes has been going on for years and has been on such a scale it has put inflationary pressure on the economy.

Many analysts say the EFCC has been extremely weak when it comes to fighting corruption as low-ranking officials tend to be investigated rather than so-called big fish who appear untouchable, according to BBC correspondent says.

The suspects are to make their first appearances at the federal court in the city of Ibadan on Tuesday.