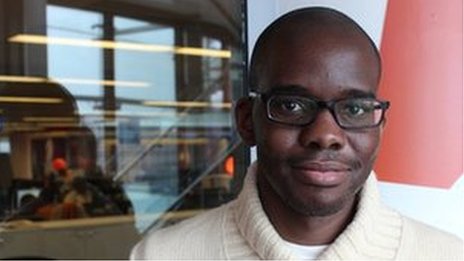 US-based Nigerian writer Tope Folarin has won this year's prestigious Caine Prize for African Writing, receiving the £10,000 ($15,000) prize for his short story, Miracle, set in an evangelical Nigerian church in the US state of Texas.

The judges described it as a "delightful and beautifully paced narrative."

Mr Folarin was among five writers short-listed for the prize, regarded as Africa's leading literary award. Three other Nigerians were short-listed - Elnathan John for Bayan Layi, Abubakar Adam Ibrahim for The Whispering Trees and Chinelo Okparanta for America.

Sierra Leone's Pede Hollist was the only non-Nigerian short-listed for his short story Foreign Aid.  Ms Okparanta was the only female contender. The chair of judges, Gus Casely-Hayford, awarded Mr Folarin the prize at a dinner held at the Bodleian Library at Oxford University in the UK.

"Tope Folarin's Miracle is another superb Caine Prize winner - a delightful and beautifully paced narrative, that is exquisitely observed and utterly compelling," he said.

In Miracle, a congregation gathers at a church to witness the healing powers of a blind pastor-prophet.

"Religion and the gullibility of those caught in the deceit that sometimes comes with faith rise to the surface as a young boy volunteers to be healed and begins to believe in miracles," the Caine Prize said in a statement.

This is the second consecutive year that a Nigerian has won the prize. Last year's winner was Rotimi Babatunde for his story Bombay's Republic - about Nigerian soldiers who fought in the Burma campaign during World War II.

Tope Folarin is the recipient of writing fellowships from the Institute for Policy Studies and Callaloo, and he serves on the board of the Hurston/Wright Foundation. Tope was educated at Morehouse College, and the University of Oxford, where he earned two Master's degrees as a Rhodes Scholar. He lives and works in Washington, DC.